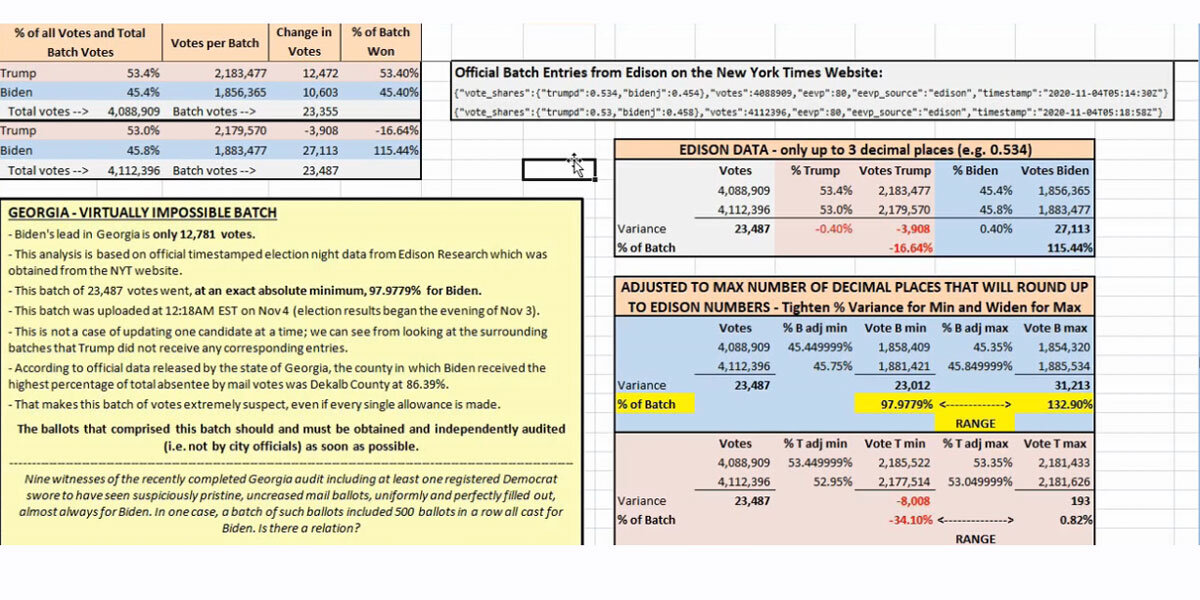 – Biden’s lead in Georgia is only 12,781 votes.
– This analysis is based on official timestamped election night data from Edison Research which was obtained from the NYT website.
– This batch of 23,487 votes went, at an exact absolute minimum, 97.9779% for Biden.
– This batch was uploaded at 12:18AM EST on Nov 4.
– This is not a case of updating one candidate at a time; we can see from looking at the surrounding batches that Trump did not receive any corresponding entries.
– According to official data released by the state of Georgia, the county in which Biden received the highest percentage of total absentee by mail votes was Dekalb County at 86.39% (a whole other can of worms).
– That makes this batch of votes extremely suspect, even if every single allowance is made with the minimum number of votes gained and assuming it’s 100% mail in from the most heavily D county.
– There are likely thousands of questionable votes in this batch.

The ballots that comprised this batch should and must be obtained and independently audited (i.e. not by city officials) as soon as possible.
———————————————————————————————————————–Nine witnesses of the recently completed Georgia audit including at least one registered Democrat swore to have seen suspiciously pristine, uncreased mail ballots, uniformly and perfectly filled out, almost always for Biden. In one case, a batch of such ballots included 500 ballots in a row all cast for Biden. Is there a relation?