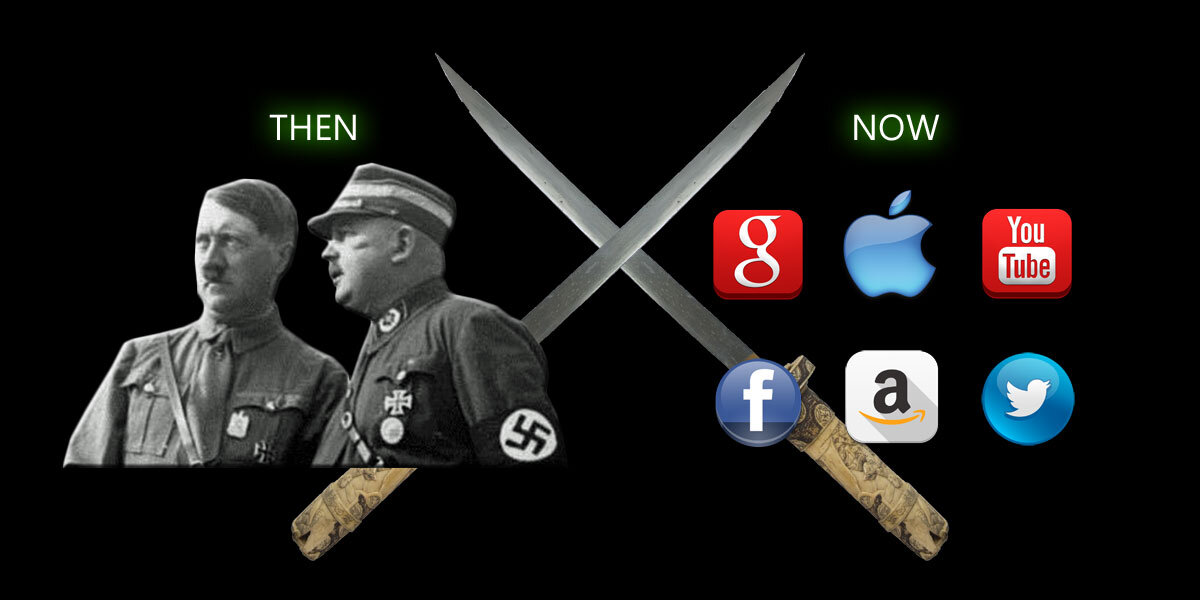 In 1934 Hitler executed members of his paramilitary organization (the SA – Sturmabteilung or Storm Troopers) to consolidate his power, claiming it was to prevent a planned coup. In like fashion, using the incursion into the Capitol building, the Lords of Silicon Valley used this is a cover to muzzle those whose views with which they disagree.

Not only has Donald Trump — still the president of the United States — been permanently banned from Twitter, its rapidly growing, open-to-all substitute Parler has almost simultaneously been de-platformed by Google.

You can’t get their app for Android anymore.

Apple threatens to be next, demanding Parler kowtow (by Saturday!) to Cupertino’s vision of what the world should be.

I suppose that’s a social-justicey-politically-correct totalitarianism led by left-leaning… or so they want us to believe… tech billionaires. [snip]

Josh Hawley’s forthcoming book… on Big Tech, no less… is “canceled” by Simon & Schuster. Senator Hawley had been among the most outspoken about investigating the possibility of election fraud.

Twitter permanently blocks General Flynn. I guess they don’t think he has had enough already.

More insidiously, Facebook starts to delete groups or forums of people who publicly stepped away from the Democratic Party because of its scandals.

(Elsewhere it’s revealed that Facebook banned accounts at the behest of Hunter Biden.)

YouTube announces it will no longer distribute videos investigating election fraud and that producers of such videos will be punished if they do.

All this in a couple of days, the excuse being, in almost all cases, that the conservatives involved were instigating violence, the “outrage” that occurred at the Capitol.

One observer, noting that Twitter still allows the Ayatollah to post his anti-American screeds there suggests a way out for him:

The purge took place after Michelle Obama chimed in for them to do just that:

If you call yourself conservative you’d better decide quickly whether you side with Michelle Obama or @realDonaldTrump.

JUST IN: Former first lady Michelle Obama calls on tech companies to permanently ban President Trump from their platforms and put policies in place “to prevent their technology from being used by the nation’s leaders to fuel insurrection.”